Governor John Hickenlooper and Viaero’s own Executive Vice President/CFO, Mike Felicissimo announced the 2018 Pedal the Plains route at the Colorado State Capitol on Wednesday, April 25th. This year’s route includes the towns of Kiowa, Bennett and Limon. “Viaero loves to sponsor the ride because northeastern Colorado is our home. This route is about seeing where your food comes from, and showing the eastern plains, the beauty, and the farming activity,” said Mike Felicissimo. 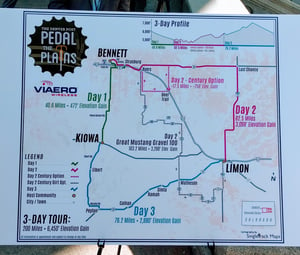 The cycling tour of Colorado’s heartland communities will begin in Kiowa and end in Bennett on day one. Cyclists will travel from Bennett to Limon on day two, and then circle back from Limon to Kiowa on day three. The route will cover nearly 200 miles, with extended deer and gravel trail options on the second day.

Dierdre Moynihan, Tour Director for Pedal the Plains, stated the event is “about community and frontier spirit.” It’s “a party on the bike and a party off the bike” where you can “learn about all the wonderful things out there.”

Kiowa is where this year’s Pedal of the Plains will begin. Featuring a population of 724, the town is part of Elbert County. The county is Colorado’s second fastest in terms of growth and the nation’s fifth. Kiowa was first settled in 1859 by the Kiowa creek and was originally a stage stop along the Smoky Hill South and Butterfield Overland Dispatch trails. The town has a history of surviving floods, and lively disputes between farmers and ranchers.

The second town along the route is Bennett, incorporated in 1930 along what is now 1-70. Located twenty-five miles from Denver’s downtown skyline, Bennett has 6.5 miles of walking trails and several open spaces for families, including its recently renovated Centennial Park. The town’s population is estimated to be near 2,500 people.

Limon is the third town along the route, incorporated in 1909 and known as Eastern Colorado’s “Hub City.” I-70, along with several major U.S. and Colorado state roads all connect through Limon, making it a convenient place to stay for its nearly 2,000 residents. The town has a strong agricultural base of farms and ranches, but is also a growing producer of renewable energy with three wind farms. Limon’s cultural and recreational amenities include the Smoky Hill Trail, the Lincoln Theatre, and the Limon Heritage Museum Complex. 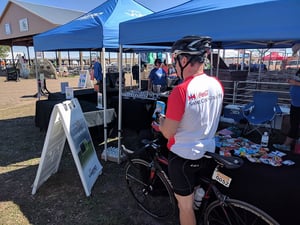 Pedal the Plains 2018 will begin on September 14th and end on September 16th. Registration, lodging and additional details are available online. Cyclists can expect to ride between 50 to 80 miles per day, and can choose to stay in hotels, indoor or outdoor camping facilities, or private homes along the route. Pedal the Plains aims to support several nonprofit agencies that benefit the lives of rural Colorado communities, including the Colorado 4-H and Colorado Future Farmers of America (FFA) foundations.