Nebraska’s Viaero Center: An Impressive Venue for Our Community 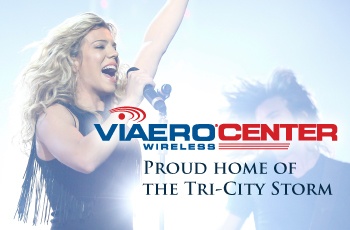 Kearney, Nebraska is home to the Viaero Center which serves as a premiere venue for sports, entertainment, and other local and regional community events. Central Nebraska residents and visitors are treated to a variety of affairs at this world-class events center year-round including recreational and professional sporting competitions, concerts, ice skating, trade show events and more.

The facility opened in 2000 and operated as the Tri-City Arena, and later held the name, Kearney Event Center. In 2007, business sponsorship deals began with Viaero and the Tri-City Storm hockey team. In 2009, Kirk Brooks took over as owner of the Storm and played an integral role in signing a naming rights deal with Viaero. The venue has been known as the Viaero Center ever since that time.


The Viaero Center is located at 609 Platte Road, Kearney, NE, 68847. The venue offers numerous modern amenities and holds between 4,000 and 5,500 people depending on the event.

Viaero Center and the Community

The original name of the facility was the Tri-City Arena, with an initial goal in mind to unite the three cities of Kearney, Grand Island and Hastings, Nebraska. The arena provides a very impressive venue for an array of activities for the the Tri-City area and residents of the central Nebraska region.

The arena continues to benefit economic improvement in Kearney. Restaurants, bars, hotels and other businesses enjoy yearly revenue from events at the Viaero Center. The building also holds meeting space for the Kearney Chamber of Commerce and other organizations.

We’re Proud to Have Our Name on a Community Landmark

It’s a big decision and opportunity for any corporation to gain exclusive naming rights for a sports arena & convention facility like the Viaero Center. We’re proud to have our brand name represent such an important center of activity serving the communities of central Nebraska.

The President of Viaero Wireless, Frank DiRico, and the owner of the arena, Kirk Brooks, are both down-to-earth and forward thinking businessmen. They came to an agreement over conversation and a handshake.

Mr. DiRico figured out a way to incorporate our name brand into something that serves our rural communities in so many ways. He wanted Viaero Wireless to be more involved with our customers and add common good centered around fun activities.

It’s no coincidence we put our name on this building. It provides numerous positive aspects to heartland residents of central Nebraska and represents something special we enjoy being a part of.

Since 2000, the Tri-City Storm call Kearney, Nebraska and the Viaero Center home. The professional hockey team is a Tier 1 junior ice hockey team in the United States Hockey League (USHL).

The team recently had one of their most successful seasons to date resulting in winning the Clark Cup Championship of the USHL. The Storm boast a solid fan base in central Nebraska and the Viaero Center gets rowdy with excitement throughout the season, especially during the playoffs.


Visit the Tri-City Storm website for more on the team and to purchase tickets.

The Viaero Center not only provides Central Nebraska with a championship professional hockey team, but also supports junior & adult leagues and development programs.

The Tri-City Adult Hockey League provides a great platform for adults across the heartland to participate in organized league play taking place at the arena.

Local community youth leagues are fortunate to play games in the Viaero Center as well. “Junior Storm” youth hockey leagues play a full schedule of games at the facility for kids of all ages. The Tri-City Optimist Youth Ice Hockey Association features a ‘Blades for Grades’ program honoring student-players who maintained A or B semester grades during the season.

There may be no better venue in central Nebraska for live music than the Viaero Center. Big-name musicians, bands, concerts, festivals and other talented artists hold their shows at the events center throughout the year. The state-of-the-art venue hosts locally and nationally renowned performances always worth the price of admission. Check the website calendar for a list of upcoming events.

As mentioned, the facility provides a great locale for industry trade show events, family entertainment & recreation, community functions and more. The Viaero Center is truly a gem for those in and around the Tri-City Area.