3 Towns Featured in Pedal the Plains 2017 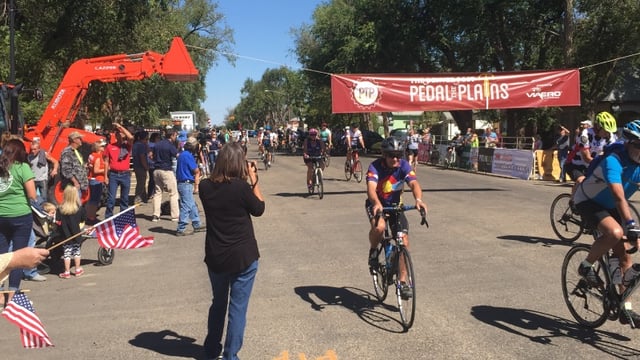 The 7th Annual Pedal the Plains Bicycle Tour offers cyclists scenic routes highlighting agricultural towns in the eastern Colorado plains. Riders get a firsthand experience of heartland values and a chance to honor the communities we call home.

Viaero is a partnering sponsor of Pedal the Plains and our culture is deeply entrenched in the event. Volunteers provide cold water and cell phone charging stations along the route, and employees participate as cyclists. Mike Felicissimo (Executive Vice President /CFO) is an avid participant in the event and has publicly announced routes with Colorado Governor John Hickenlooper in Denver.

This year’s route features three towns we’re proud to be a part of: Kersey, Keenesburg,
and Brush. The 3-day event takes place September 15 - 17.

The bicycle tours kicks off in Kersey, located east of the Rocky Mountain foothills and Greeley, and south of the Pawnee Buttes.

The "close knit agricultural community" is made up of about 1,500 people. The town is surrounded by large ranches, cattle feeding operations, dairies, and farms. Kersey is also close to multiple reservoirs for boating, hunting, fishing, and wildlife watching.

This year’s route will lead riders across ditches, reservoirs and irrigation districts. The route proudly showcases how Kersey cares for their biggest community resource: water. As the riders head south, they’ll see many of the agricultural farms and businesses in the area, including the Timmerman Cattle Company in La Salle.

Day two begins in Keenesburg, which is about 20 miles northeast of Denver International Airport on the I-76 corridor.

The town of 1,200 people has a rich culture in "community involvement and argicultural traditions." Built along the railroad line between Denver and Fort Morgan, Keene (the town's origianl name) is just two years away from their 100th birthday as an incorporated town.

The Wild Animal Sanctuary also calls Keenesburg home. Cyclists will get to ride along the sanctuary when they first enter the community at the end of day one. The sanctuary calls itself, “the world’s largest carnivore sanctuary -– with more than 450 rescued lions, tigers, bears, wolves and other large carnivores living and roaming freely on 720 acres.”

Riders start the final day of the tour in Brush, just 10 miles east of Viaero headquarters in Fort Morgan on the I-76 corridor.

The largest of Pedal the Plains' three featured towns, Brush is home to around 5,500 residents. They live a “highly valued rural quality of life while easily mixing high tech with traditional rodeos and country concerts.”

Brush is also home to the famous Texas-Montana Cattle Trail, which followed rivers and creeks to bring longhorn cattle from Texas to Montana to satisfy a growing demand for meat. A community rose out of the supply station, and the establishment of a railroad nearby led to a booming start.

Brush boasts great local restaurants, five parks, a museum, a golf course, fishing, wildlife areas, and other recreational options. Cyclists will pass by one of the town’s acclaimed parks, Museum Park, which includes a fishing pond, a local pool, and a beautiful area to host events.

We hope participants discover the beauty of our rural communities and have a blast on the tour! If you’re participating in the event, don’t forget to look for our Viaero Stations along the route for cold water and mobile phone charging stations.