6 Reasons Viewers Use a Second Screen While Watching TV

Multitasking in front of the television screen is on the rise, according to a recent Nielsen report. Approximately 45% of adults state they use a second screen quite often or always when they’re watching television. This percentage reflects a growing number of people who use their smartphones, tablets, or laptops during shows and movies.

Reasons for Second Screen Use

The majority of viewers use another device to engage with others on social media, shop online, or find alternative content to watch. Some additional reasons for using another device include reading and following-up on e-mails and engaging in work-related activities. Others use a second device to look up information about the show they’re currently watching.

As multitasking in front of the TV is expected to continue to increase, it is more likely to be done on a smartphone according to MarketingDive. This behavior reflects a growing addiction to smartphones, but not necessarily a lack of interest in television-related content, as stated in Nielsen’s report. While cord-cutting is on the rise, 71% are using a second device to look up information related to what they’re watching, while 41% are texting, instant messaging, e-mailing, or tweeting about the show they’re viewing. 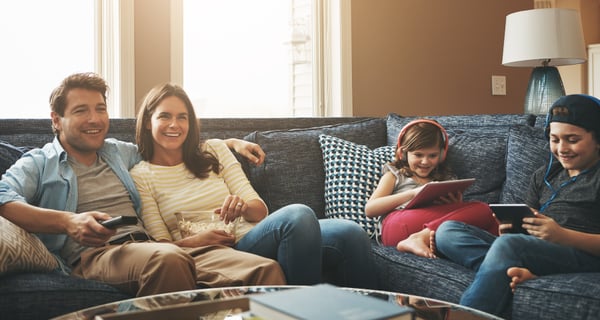 Younger age groups are more likely to use a second screen while viewing television, according to data from Go-Globe. Seventy-nine percent of 18-24-year-olds use another screen during commercials, 68% of 25-34-year-olds engage in this activity, and 60% of 35-49-year-olds access content on a second screen. The percentage drops to 33% for those aged 50-64 and drops to 20% in those 65 years of age and older.

While the trend indicates that smartphones may play a more pivotal role in how we’ll watch entertainment in the future, it also suggests a move towards an interactive viewing experience. Some of the possibilities include increased polling or voting on content and “choose your own adventure” type storylines. Lauren Goode of The Verge interviewed an Apple executive who indicated developments for an interactive TV app are underway. Netflix has also been experimenting with series that feature non-linear storytelling and interactive elements, as told by Variety.

Even though the technology for a fully interactive TV experience may not be a reality now, it doesn’t mean that it won’t be soon. Interactive programs will not only change how we watch but will change what certain audiences see. Further personalization of content is likely to become the standard, which may determine who is able to engage with others about different pieces of content from the same show.

What do you think about this growing trend? Do you use a smartphone or tablet while watching TV? How do you feel about the possibility of interactive television? Tell us below!

Ready to cut the cord and get a more personalized TV experience? Check out our entertainment deals on FREE Sling TV!