What Are the Top Uses for Smartphones?

The days of cell phones being used as talk-only devices are long gone. A survey from Deloitte found that average users check their phone 47 times a day, and an Apple security briefing reported that their average users unlock their phones around 80 times a day. What are people actually doing on their smartphones with so many phone checks, and how do you stack up against them?

Phone calls are far from dead, but texting is becoming even more important in our fast-moving world, regardless of how old you are. In a Pew Research Center experience survey, researchers tracked the daily phone use over a week and 97% of users reported texting at least once. Calling was a close second activity, with 92% of users making or receiving a call over the study. But unlike calling, texting is the most frequently used feature on phones. In fact, the Deloitte study found that a third of smartphone users check their messaging apps first thing in the morning. 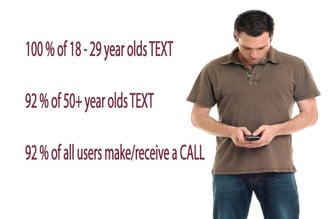 Even across age groups, texting is king. All18-29 year olds, that is, 100% of 18-29 year olds—and 92% of people aged 50 and older used text messaging at least once in a week. Even though it’s a common joke that parents and grandparents are unable to keep up with texting, it’s almost as common for them as it is for their children and grandchildren.

Not Just Surfing the Web

After calling and texting, browsing the internet and checking email are the second-most widely used features on smartphones. But people weren’t just searching for trivial facts. In the past year, the following most common reasons to use the internet on a mobile device were:

Although internet browsing was more reported than checking email, people who did check their email did so more frequently. Additionally, young and old people used email at about the same rate, according to Pew.

Additionally, smartphone owners use their devices to interact with their world and community outside of social media channels. Pew reported that around two thirds of smartphone users at least occasionally keep up with breaking news from their phones or share pictures, videos, or commentary about events happening in their area. More than half use their phones to occasionally learn about events and activities happening in their community.

Shop the Apple iPhone® 7 featuring the App Store with numerous social media apps to choose from. 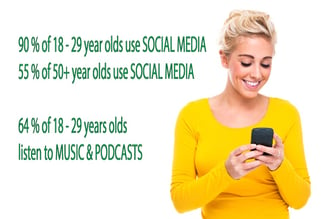 Entertainment and Services for the Young… for Now

While there is a large generational gap on social media, it is more pronounced in other activities. Overall, younger people were more likely to spend time watching videos and listening to music or podcasts—for example, only 21% of people aged 50 and over listened to music or podcasts from their phone while 64% of people between 18 and 29 did.

Like entertainment, younger smartphone users are more likely to rely on online banking. About seven in ten young adults have used their phone for online banking according to Pew research. Financial transactions, including mobile payment apps, continue to increase in popularity.

Though the “digital natives” (people who grew up with technology) continue to dominate activities on smartphones, older generations are catching up in their habits. From calling to banking, people are using their smartphones to make it easier to navigate their own lives.

The future of wireless technology shows no sign of going down. We’re excited to see our industry continue to grow to help people stay connected to their family, friends, and community.