Youth and Effects of Social Media, Smartphone Use, and Unlimited Data

Just a few generations ago, it wasn’t common for most children under 18 to be connected to the digital world. That has changed drastically as 53 percent of children now own their first smartphone by the time they turn 11, according to NPR. By the time many children enter their teen years, 84 percent use smartphones.

Although pre-teens and teens have a history of using smartphones and social media to stay connected to others, the way they use social media, mobile data, and smartphones have changed. According to the Pew Research Center, 45% of teens are online nearly all the time. This has potential social and economic impacts on families. While unlimited data plans have been a wireless industry standard for years, it’s also common for families to use shared plans with monthly data limits.

How Has Cell Phone Use Among Teens and Pre-Teens Changed?

In 2009, data from the Pew Research Center revealed the majority of teens used cellular phones to keep in touch with friends through phone calls and text messages. Back then, 38 percent of teens used cell phones every day to send text messages, while 36 percent used their phones to engage in conversations each day. According to Pew’s survey, 26% sent messages or participated in daily conversations through social networks.

A decade later, teen use of smartphones for social media has risen dramatically. Part of the reason for this may be advances in technology and the creation of more social media sites. Most teens are using YouTube and Instagram daily, followed by Snapchat and Facebook, according to the Pew Research Center. When asked about the effects of daily social media use, the responses were inconclusive. 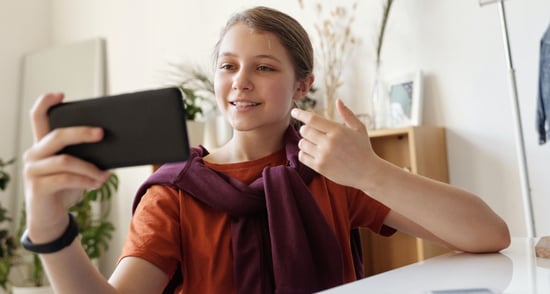 While 31 percent of teens said social media had positive effects on their lives, 24 percent disclosed negative sentiments. The majority – 45 percent - said social media’s impact was neutral. Teens and pre-teens revealed being able to connect with family and friends, talking with others that share identical interests, and finding news stories faster were top positive reasons to use social media. Negative effects included bullying, spreading false information about others, increased distance and a lack of face-to-face contact, and the risk of developing an addiction to social media.

Common Sense Media’s survey of pre-teen and teen smartphone and social media use also indicates YouTube is the most popular platform. Pre-teens between the ages of eight and twelve spend around 5 hours a day online, in front of a screen displaying some type of media. Fifty-six percent of pre-teens in this age group watch YouTube videos online every day, while 69% of teens aged 13 to 18 do the same.

According to Common Sense Media’s data, the age that children get their first cell phone is shifting towards younger age ranges. Over 50 percent own a smartphone by age 11, and this percentage rises to 69% by age 12. Although most kids do not create their own content for social media, those from lower-income households rely on their phones’ mobile data connection to complete homework.

Due to more frequent data and internet use, unlimited plans for students can be more ideal. However, the cost of those unlimited plans can sometimes be a barrier. Parents might also be concerned that an unlimited plan will give their children even more license to become glued to their phones. To help avoid smartphone addiction, Common Sense Media recommends parents show their children good balances between screen time and non-screen time. Parents can also designate periods when the phone should be put away.

Finally, parents can be proactive in preventing problems with social media and internet use before they start. Some recommendations include installing parental control apps and getting to know how children can access content on popular social media sites. Parents can also research what type of content teens and pre-teens can be exposed to and spend time with their children using different apps and web sites.

Low-cost, basic student unlimited plans can help children get the unlimited data they need, without breaking their budget.

Students, teachers, principals, superintendents, and IT Directors will want to check out Viaero’s new student unlimited plan for only $10/mo.!

What are your thoughts about smartphone and internet use among pre-teens and teenagers? Have you run into any challenges managing your children’s screen time?