Watch the Weather with @ViaeroWXCams 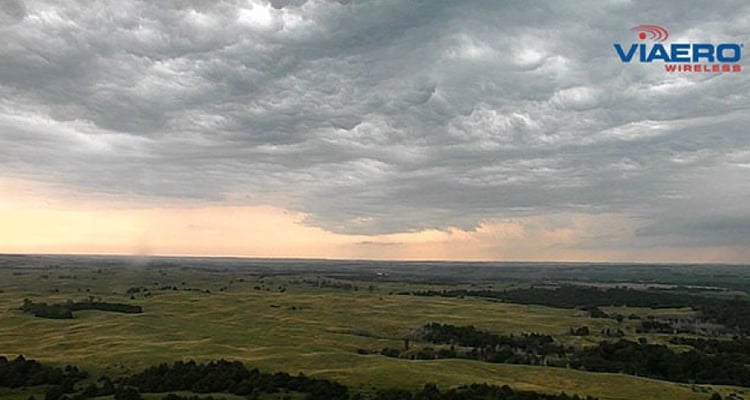 Clouds, and the weather conditions that create them, are stunning to watch. Viaero has a new way to keep an eye on the sky in your area with our new Twitter account, @ViaeroWXCams, or through live feeds on our website! But did you know that these cameras play a vital part in community safety and weather reporting?

But Doesn't Weather Radar Do the Job?

Weather radar, or doppler radar, observes and helps meteorologists predict the weather. However, it has some limitations, especially the further you get away from the radar itself. Doppler radar bounces radar signal off of objects like raindrops or hailstones. It reads the speed and the direction of raindrops to project where the storm is heading and how intense it is.

“Here’s the problem with only relying on weather radar for issuing tornado warnings,” said Mike Nelson, Chief Meteorologist at 7NEWS Denver, “The earth is curved and the radar beam goes straight. By the time you get about 100 miles out from the radar, you’re looking 20,000 feet up into a stormcloud… The farther away you get, the more difficult it is to tell what’s really going on the ground because you’re looking up high in the sky.”

That distance can also lead meteorologists to underestimate or overestimate the severity of a storm, according to the National Weather Service’s (NWS) explanation of doppler radar.

There are four doppler radar stations that cover the eastern Colorado plains, three that cover Nebraska, and two that cover the western plains of Kansas. “They see pretty well, but obviously if you're in Sterling and Akron, you’re a pretty good distance away from those radar sites,” Nelson added.

“That’s why the Viaero cameras are so important. Having them scattered all over the eastern plains of Colorado and across Nebraska and Kansas, we get ground proof of what the radar thinks it’s seeing,” Nelson explained. "I can't say enough about them. I think the Viaero camera network is as important of an update for protecting people on the eastern plains of Colorado as doppler radar has been. That's a strong statement, but it gives us an eye on the sky that is just unprecedented."

And that visual is important too. Living out on the plains, we're all accustomed to thunderstorms. Kent Boughton, Chief Forecaster at NTV, said, “Our viewers know what a bad storm looks like. People love looking at thunderheads, and they know that when one is reaching way up in the air that it’s bad news. When they see it on the camera in one of our shots, they know they have to look out. It’s a real plus for our viewers.”

See Live Weather in Your Area

Viaero has 60 weather cameras on its towers, and we’re always adding more. These cameras are high-quality network cameras with the power to continuously pan 360° plus they can shake themselves to knock off water or snow. And with at least 30x optical zoom on the cameras, they have the power to zoom in for miles to get a closer look at weather and even wildfires. 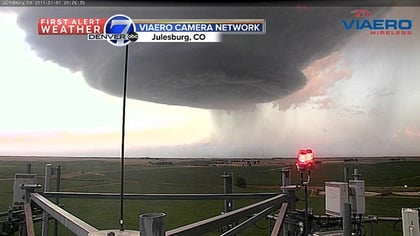 Viaero partners with 7NEWS Denver, NTV, and KDRO to bring live weather streaming to local news stations. They have the power to control our cameras from the television station, so they can direct the cameras to whatever is most important.

"The beauty of Viaero cameras is that we can go basically anywhere [in Nebraska] with the expansion of the cameras… and we can show our viewers the intensity of a storm. That visual effect with these cameras is just pure frosting on the cake," Boughton said.

Viaero's weather cameras are now integral part of these stations. "We're constantly looking at them," Boughton said, "My favorite thing is the flexibility. I can turn them 360 degrees, and I can zoom in 25 miles. There's one down at Lake Maloney, which is south of North Platte, and I can zoom that all the way into the interstate and see the exits at North Platte with clarity."

"I spin through those cameras all the time," Nelson explained, "I put them in our time lapse machine so we can get some fantastic cloud motion. I look at them dozens of times a day." He laughed and added, "Tell Frank [President of Viaero] thank you."

In May, Mike Nelson spotted a tornado on a Viaero weather camera and alerted the local community a full seven minutes before the NWS issued their warning. "There's a couple of different incidents over the last few years," Nelson said, "It's hard to keep track of specifics since there are so many instances that these cameras have done that for us." Since then, 7NEWS Denver has given the NWS access to the cameras so they could fine-tune their warnings.

Viaero is proud to offer our cameras to our local news stations to help improve community safety through more accurate weather warnings. 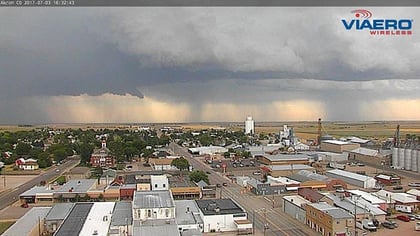 If you want regular updates on the coolest weather moving across the plains, look no further than Viaero’s new Twitter account, @ViaeroWXCams. We share our favorite shots of storms, sunrises, sunsets, and clouds. If you catch something cool while you're live streaming our cameras, feel free to tweet it at us, and we may retweet you!